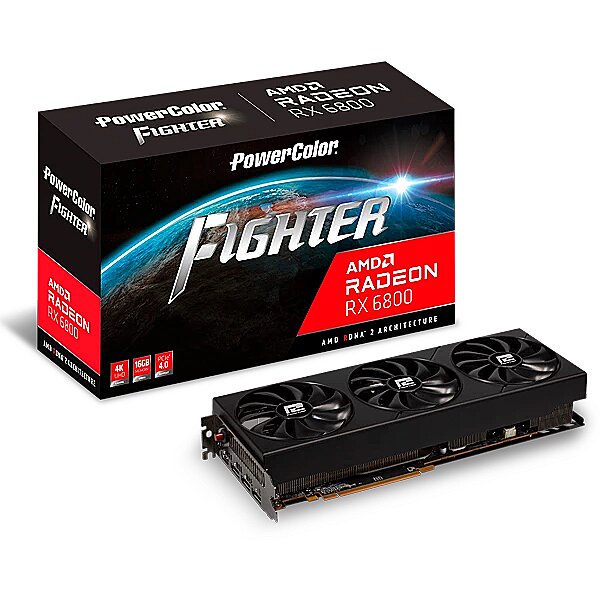 Picture may differ from actual product, there can be accessories and parts not supplied with the actual product.
Interest-free loan in cooperation with Aizdevums.lv. Loan maturity 3 months, amount up to 4500 €, down payment of 0%, GPL 0%.
ID: 787342 Product code: AXRX 6800 16GBD6-3DH/OC
In stock 6 units
Warranty: 2 years (Warranty for business entities 1 year)
Delivery options More about shipping

AMD FreeSync - Synchronises the FreeSync monitor refresh rate with the FPS reported by the graphics card to prevent image tearing and jitter.

Radeon Anti-Lag - a new feature that reduces the lag time between moving the mouse and displaying an action on the screen by up to 31%.

Radeon Boost - dynamically reduces game resolution during moments of intense on-screen action. This enables higher FPS without a noticeable loss in quality and improves the player's chances of winning.

One of the most impressive technologies of the Radeon RX 6800 is AMD Smart Access Memory. It enables Ryzen processors and Radeon graphics cards to communicate with each other, delivering up to 7% performance improvement in PC gaming. 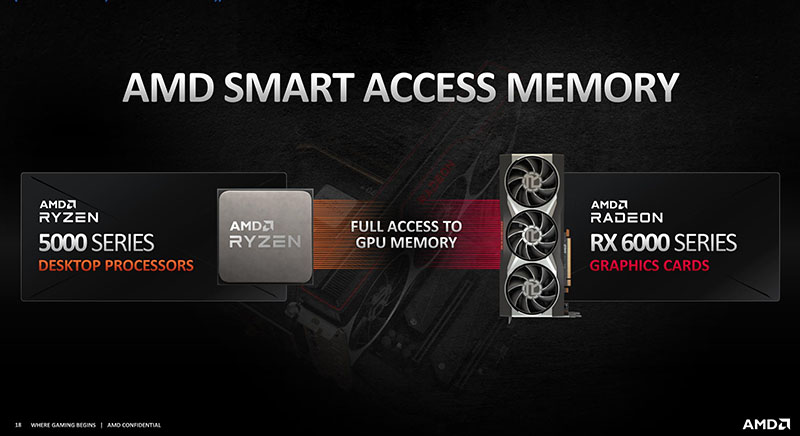 To take advantage of Smart Access Memory, your PC must be equipped with a Ryzen 5000 series processor and an A520, B550 or X570 motherboard!

Radeon RX 6800 performance convincingly outperforms the GeForce RTX 2080 Ti and is comparable to the NVIDIA GeForce RTX 3070, beating it in several games! 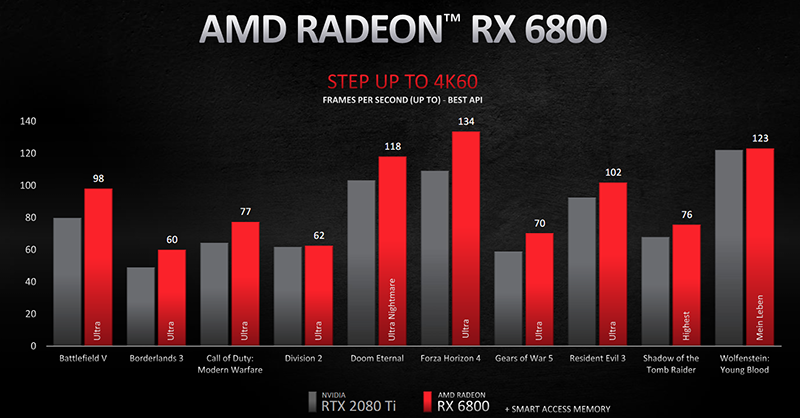 Here's a video of the Radeon RX 6800 in action, comparing it to its direct competitor from NVIDIA - the GeForce RTX 3070.

To get the most out of PowerColor Radeon RX 6800 the video card, we recommend installing it in a PC with at least 650 W power supply and one of AMD's 5000 series Ryzen 5, Ryzen 7, Ryzen 9 or Intel's 10th generation Core i7 or Core i9 processors!

This is the main performance indicator of the graphics card because it indicates the model of this card. The performance of cards of the same model is very similar and usually very different from the cards of another model.

The main difference is the manufacturer. NVidia produces GeForce series cards and AMD produces Radeon series cards. There are considerable differences between both series, GeForce cards have more successful (more stable) drivers, which improve the compatibility of these cards with games and operating systems reducing the image defect (artefact) and the cases of "hanging" to the minimum. Radeon cards usually are cheaper and consume less energy (they are technologically superior), however there might be problems with drivers and the support of games.

The choice between Radeon or GeForce series is the question of preference, similar to the choice between AMD or Intel CPU, and not always there is 100% rational justification behind it, therefore we recommend to base your selection criteria just on the games that you want to play in the near future and to find a video review in YouTube (the graphic card model + the game title) that will demonstrate exactly how the particular card handles the relevant game. The result will be obvious and usually quite close to what you get when you buy the particular or similar model card.

For making the choice easier for our customers

The RAM capacity of the video card. This is an important parameter if you want to play games of high resolution or work with a high resolution monitor. A higher memory capacity means better performance and the support to higher resolution.

Currently 1GB is the optimum capacity of the video memory.

Functionality
Cooling Standard Cooler
Two types of cooling are available, i.e. a radiator and a ventilator. The radiator based cooling is implemented without any moving parts (ventilator), therefore the video card does not emit any noise. The ventilator based cooling is more efficient, however, the video card emits certain noise during the computer operation.
Izgaismojums : Nav
NVIDIA SLI (NVLink) support : Not
VR (Virtual Reality) Ready : Is
Low Profile support : No
Ports and equipment
HDMI port 1

HDMI is the digital image and sound transmission standard that allows to connect a TV set, monitor or projector supporting HDMI to the computer via the HDMI cable.

DisplayPort digital connection for the transmission of the image and sound via a single wire at a high quality level. Contrary to the HDMI, this connection allows to connect several external monitors to the computer via a single connector.

D-SUB is the classic (analogous) connection plug of monitors, projectors and other external video devices. This standard is gradually disappearing from the market leaving the space for much higher quality HDMI or DisplayPort (digitālajiem) plugs. 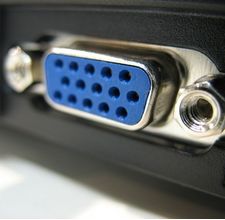